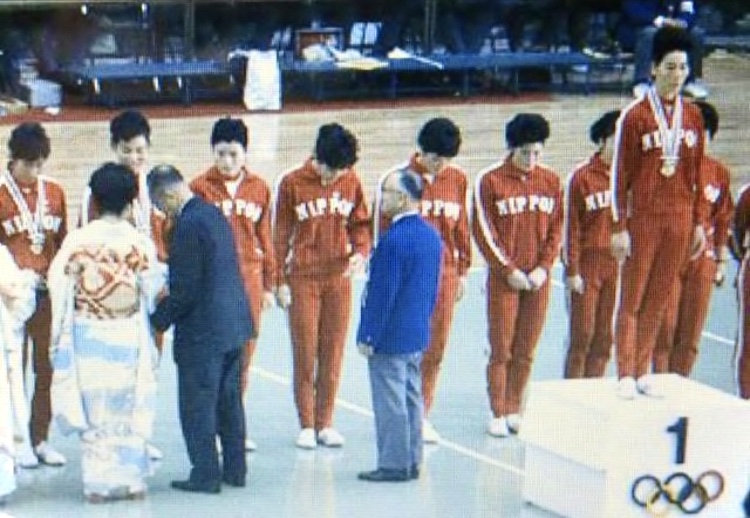 UN Secretary-General António Guterres: “The only guarantee against the use of nuclear weapons is their total elimination”, he said in a video message to the Hiroshima Peace Memorial in Japan, held on Friday morning, local time” (UN News 5 August 2021).

The Asahi Shimbun newspaper and Reuter writes about the games today (6 August 2021) that the organizer International Olympic Committee (IOC) has no plan to mark the moment of silence today a rejection of Hiroshima’s request to honor victims.

During the 1964 Summer Olympics the Japanese women’s volleyball team won the gold medal, with the final being broadcast live – restoring the faith of the peaceful Japan’s people in the painful memories of war and postwar rebuilding. The volleyball team was nicknamed of Nichibo Kaizuka, Oriental Witches.

There is a discourse over their coach Hirofumi Daimatsu a Japanese a military war veteran, a platoon commander in the Imperial Japanese Army in China during WW2 pressing the team to sacrifice everything for the state, coach known as the “demon,” for his brutal methods.

Hiroshima mon amour a 1959 French New Wave romantic drama film directed by French film director Alain Resnais with a screenplay by Marguerite Duras a co-production by companies from both Japan and France. The plot is nonlinear conversations between a French actress, Elle (which means “She”), and a Japanese architect, Lui (which means “Him”). Both character having memories of the war, Elle from France and Lui from Japan.

The film jumps between events in the present with Him and She and documentary film clips usually from Hiroshima but also film clips from her youth in France film leaps (Bordwell / Thompson, 2010, page 413). The film has the structure of the art film with Gaps – gaps in the narrative.

The film’s modernist narration is self-reflective (the viewer is invited to reflect).

Marguerite Duras has built her script for the film as a musical duet with a male and a female voice intertwined across the image offscreen. Often the spectator does not know if it is real dialogues, fanatical dialogues or is a commentator voice of the actors sound track (Bordwell / Thompson, 2010, page 413).

The film’s fragmented structure is reminiscent of Marguerite Duras’ connection to the literary movement The New Novel (fr., Le Nouveau Roman) where style and form are at the center and avoid classic narration to focus on the details of things in the world – completely de-dramatized. Duras also examined “feminine modernism.” – “Her slow, laconic style, with the help of static images and minimal dialogue, seeks a distinctly feminine use of language” (Bordwell / Thompson, 2010: 577).

And one can think of literary influences as Proust’s In Search of Lost Time where memory episodes play an important role. Postwar modernism wanted to be more true to life than classic filmmakers had been. The filmmakers could perhaps seek to reveal unpleasant realities such as the horrors of fascism, and war and occupation (Bordwell / Thompson, 2010, p. 328).

The purpose of the film’s modern storytelling is the question of whether it is better to remember or forget a tragedy? As She and He recall the trauma of the past, they have a chance to reconcile with themselves and renew their lives in the future at the open end of the film.

Duras introduces a stylistic poetic concretisation in the sound of dialogue as competing with the image. The dialogue has musical properties and begins to take shape on a level that is sensory rather than semantic. Some of the most memorable aspects of the film are the actor’s voices reading the script and the rhythmic patterns of repetition and opposition within the dialogue, through which some of the film’s central themes develop. These effects are embedded in the script, which also provides detailed instructions on what tone the script should be read (Davies 2010: 13-14).

The composer of the film music was Giovanni Fusco who worked a lot with Antonioni. A possible association with the form and style of rosy Italian neorealism where it exists, including a sweeping musical score that is reminiscent of how opera phonetically places music as the basis for a stage’s emotional development (Bordwell & Thompson 2010: 333).

The character development is the driving force in the film and can be seen in the plot with the dialogue between Him and Her. 15:41 into the film, she sees the sleeping Japanese man’s hand and gets subjective evocations that are strong anxiety (emotional high point) dramatic, from her memory of her German lover’s hand when he lies dead on the ground. She seems to have difficulty distinguishing between her current lover in Japan and her lover in the past in Germany.

The film climaxes, the climax of the conflict and change becomes when She says “I want to forget you” (fr., Je t’oublierai! Je t’oublierai!) But She quickly changes to “Yes you are Hiroshima!” and She gets the obvious answer that “You are Nevers“. The film ends not only with an open end but with a new possible future. Naming things gives a sense of control and an interpretation a possible experienced catharsis.

IOC has no plan to mark moment of silence on Hiroshima anniversary
https://www.reuters.com/lifestyle/sports/ioc-has-no-plan-mark-moment-silence-hiroshima-anniversary-2021-08-01/

Hirofumi Daimatsu in the International Volleyball Hall of Fame
https://www.volleyhall.org/hirofumi-daimatsu.html